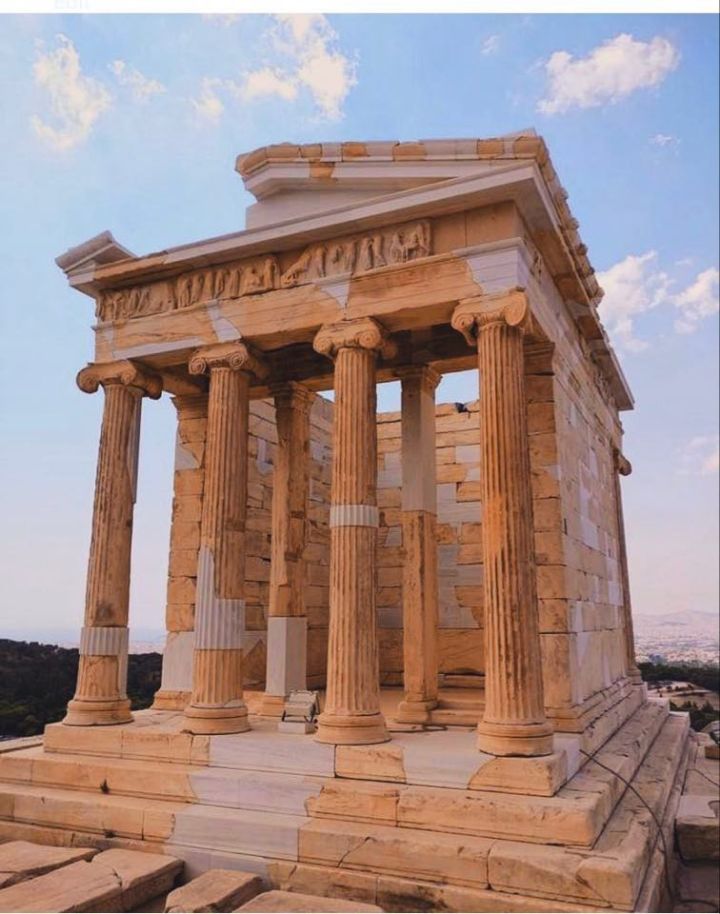 Hello everyone and welcome back to Ancient Greece! Today I will be discussing a beautiful temple on the Acropolis; the Temple of Athena Nike.

In the 6th century BC, a cult dedicated to Athena Nike was established in Athens and a small temple was built which used Mycenaean fortifications. Though the original temple was sadly destroyed by the Persians in 480 BC, construction of a new temple began in 449 BC and was finished around 420 BC. The Temple of Athena Nike is one of the earliest examples of Ionic style architecture on the Acropolis and is situated in a prominent position on the south west corner of the Acropolis to the right of the Propylaea. The Propylaea is the monumental gateway to the Acropolis of Athens and was commissioned by Pericles, the Athenian leader in 437 BC.

The temple is amphiprostyle, meaning that it has a portico at the front and the rear and is also tertrastyle, meaning that it has four Ionic style columns with a colonnaded portico. This design was common for smaller structures and temples. The temple also had numerous decorative friezes, with the majority depicting military victories and Athenian dominance over the Persians and the Greeks. The north frieze depicted numerous scenes from the Battle of Marathon. The south frieze displayed the victory over the Persians at the Battle of Plataea and the east frieze displayed the gods Athena, Zeus and Poseidon. Inside the temple, there would have been a statue of Nike, the goddess of victory. Nike statues were normally depicted as having wings, such as the famous ‘Nike of Samothrace’ however this statue of Athena Nike was wingless. This led to the statue being referred to as Apertos Nike– the wingless victory – with the story being that she was wingless so that she could never leave the city, ensuring eternal victory for the Athenians.

In 410 BC a parapet was added around the temple to prevent people from falling as it is in quite a precipitous location. The outside of the parapet was adorned with reliefs displaying Athena Nike in various activities. The temple was untouched until demolished in 1686 by the Turks. In 1834 the temple was reconstructed and in 1998 the temple was dismantled so that the crumbling floor could be replaced. The frieze of the temple was also removed at this time and placed in the Acropolis Museum. Since 1998 the temple has been slowly restored with marvellous conservation and restoration projects still taking place to this day.

The Temple of Athena Nike is not the biggest temple on the Acropolis but that doesn’t make it any less beautiful. But how does Assassin’s Creed compare?

Well, in the game, the reconstruction of this temple is pretty much perfect and it is astounding to see how much detail the developers have put into a temple which is relatively small. The temple in the game is still under construction, with scaffolding on the right-hand side and workers chipping away at huge blocks of stone in front of the temple. As the game is set between the years of 431-422, it is highly plausible that construction work was still being carried out on the temple which wasn’t finished until 420 BC. Personally, I quite like the fact that it’s still under construction in the game as it adds a sense of realism to the world.

The size of the temple in game is smaller than the temple in real life and feels a bit on the narrow side. The difference in size is made obvious when looking at the steps leading up to the temple which in reality are much larger than those in the game. From what I have seen of temples in the game however, more compact temples and smaller steps does seem to be the norm which makes sense as the game developers scaled down the buildings and cities to make gameplay more immersive. Steps aside however, the attention to detail which has gone into this temple is phenomenal. The columns for example are almost perfect and I honestly can’t really fault them – the only difference is that today, the white bits you can see on the columns are from restoration works, which the original obviously didn’t need! The detail of the frieze on the front is beautifully detailed and is indicative of deigns of the time and adds another layer of detail to this temple.

Historia Accuracy: 9/10. I genuinely love what the developers have done with this temple and the detail they have put into this relatively small building on the Acropolis shows how much effort they put into the game as a whole. As a classicist it gets my seal of approval!

Next Wednesday I will be posting about more of the Acropolis, particularly the Parthenon and the huge statue of Athena that is in the game! If you want to know more about this game/you have missed any previous articles about Assassin’s Creed Odyssey, check out my previous posts in this series all under the heading ‘Historia Gaming.’ Happy history everyone!

It’s been a hot minute but after the longest hiatus ever, I have finally written another blog post! It’s a short but sweet one about Calypso’s Cave situated on my favourite island, Gozo! I’d love it if you could go and check it out 🍷♥️ Happy history folks!
I know I’ve been very quiet on here and that this isn’t historical but it’s something I have to repost from my personal account. Please read the caption.
I have to say, Fountains Abbey NEVER disappoints 🌞 But I low key think I may prefer Rievaulx Abbey - a comparison photo shoot nedeed! ✨
I’m still trying to figure out how to re-motivate myself to post on here more regularly because I really do miss posting and I also have loads of photos of stunning historical sites! 🏰 (I blame work and adult life getting in the way how dare it!) However in the meantime whilst I work all this out behind the scenes, enjoy this picture of Helmsley Castle taken yesterday in the glorious August sunshine 🌞
Dean Village is stunning ✨ I can’t believe it’s taken me so long to finally walk there #lazy 🚶‍♀️ But I am so glad I did!
This room has to be one of my favourites in Edinburgh! I came here the first time when I was 18 and since then have been a lover of whiskey. I recently took my friend here on her visit to Edinburgh and even now, I love how the walls are just bottle after bottle of whiskey and the stunning golden colours 😍 Read below for a little description 🥃
Follow Historia Mundis on WordPress.com