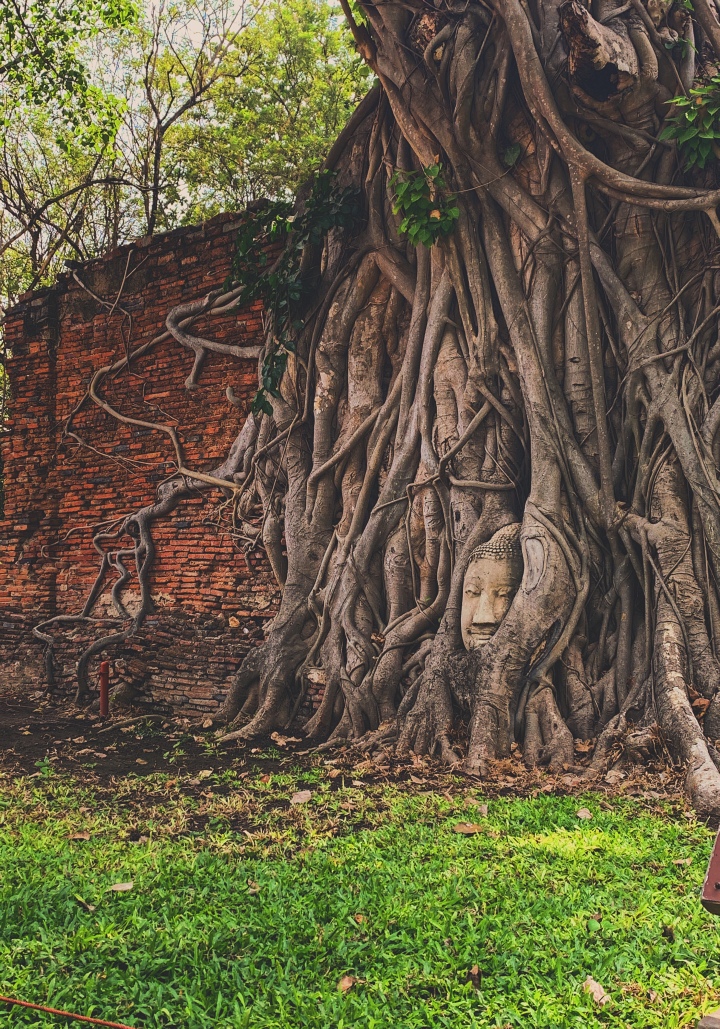 Why is there a Buddha head in a tree I hear you ask?! Well look no further for this mystery is still…not solved.

Whilst looking around Buddhist temples in Thailand we stumbled across something that we didn’t know was a famous tourist attraction- the Buddha head in the tree! Curiosity piqued I decided to try and find out more.

Wat Mahathat is a Buddhist temple situated in Ayutthaya. The temple was built in the 14th century and became the second capital of Siam- now known as modern day Thailand. Ayutthaya was thought to be one of the largest cities in the world, at the time holding over one million people in its heyday, full of jaw dropping temples.

However, due to the frequent clashes between the Burmese and Siamese kingdoms, after a long siege by the Burmese, the city of Ayutthaya fell in 1767. The city was razed with the temples falling prey to vandalism, the numerous statues decapitated and the city abandoned.

In the 1950’s however the city was brought back to life by the Thailand Fine Art Institution which took over the abandoned and overgrown city and began stunning restoration works.

The Buddha head in the tree? No one really knows how it got there! One theory suggests that the Buddha head was vandalised in the siege and lay there untouched whilst the tree roots grew around it. Another suggests a treasure hunter attempted to steal it from Ayutthaya and got caught, abandoning it at the foot of the wall and leaving it to the encroaching roots. It’s up to you which one you believe! Whatever the truth; the result is a stunning mix of human architecture and nature’s own design.

Until today I had no knowledge of the history of this amazing site! I can 100% recommend going to anyone thinking of a trip whilst in Thailand. However please remember it is primarily a religious site so be respectful!